Unfortunately, the facade of a house is often not given the attention it deserves. 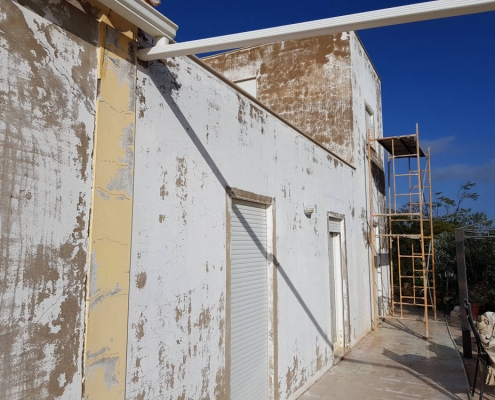 The facade should not only be given a lot of attention for optical reasons but much more for purely technical and building physics reasons.

The condition of the façade also contributes to a large extent to the comfort of living.

And let’s not forget that an accurately renovated facade enhances your property in the long term, increases its market value and makes it more attractive.

In order to be able to enjoy a pleasant and healthy indoor climate at any time of the year and at the same time keep costs for heating and renovations low, I regularly recommend my customers not to act at the last moment – when structural defects become visible and possibly unattractive – but to carry out a building inspection with them at least once a year – preferably in autumn – in order to inspect facades, walls and the like for defects with a trained eye. If such defects are then remedied promptly, this will cost less than a complete refurbishment caused by delay and necessary later.

Brownish, greenish or even reddish discoloration of a facade – or parts of it – indicates a deeper quality loss and should always be regarded as a warning sign. This can be caused by algae or fungal growth, which impairs and ultimately destroys the protective function of the façade. This often occurs in areas that are always or mostly shaded.

There are several reasons for this:

Old porous, chalky paints, for example, no longer provide adequate protection for the facade because they release moisture into the masonry without resistance.

This is easy to test yourself by brushing your hand over the facade. If white dust gets stuck on your hand, the facade is no longer protected against moisture. 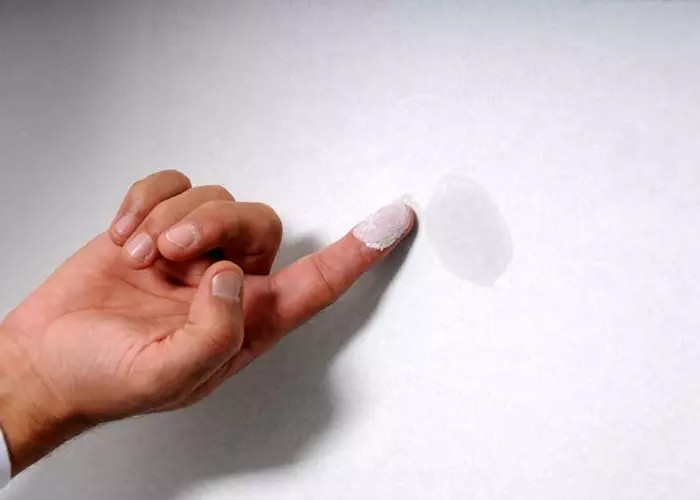 Here in the south, unfortunately very often occurring cracks in facades, due to poor workmanship, foundation subsidence, slight earth tremors due to earthquakes etc. are among other reasons responsible for the fact that it can cause moisture problems and mold in the interior. In the event of rain or even just the daily night-time dampness, water runs down the façade until it cracks and is sucked directly into the wall through the capillary effect of the plaster.

Depending on the type of cracks, shrinkage cracks, settlement cracks, etc., a suitable system for crack repair must be found such as fabric embedding and fibre-reinforced coating systems.

Damp walls, by the way, also lead to a significant increase in heating costs because of the evaporation coldness that develops on the wall surfaces. 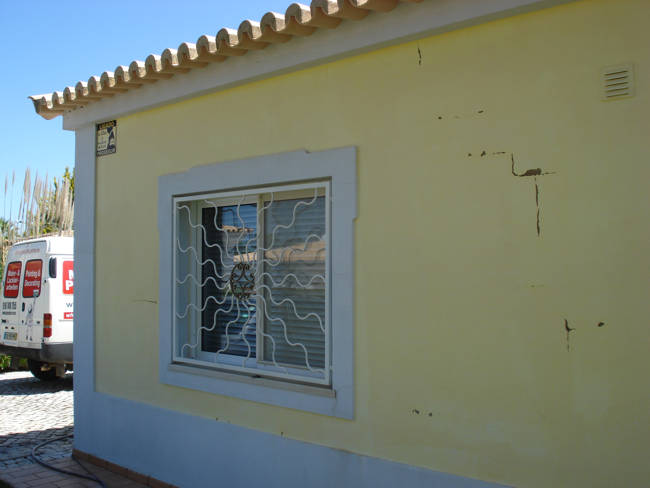 Cracks in the facade

Simply painting over cracks or applying a smear, as is often done here with silicone, only solves the problem in the short term.

The choice of the right facade painting is also very important to control the room climate and to avoid a high frequency of redecorating.

Most of the facade paints available here in the DIY stores are zero-diffusion, i.e. the moisture produced in the house by cooking, showering or even just breathing cannot be absorbed by the masonry to be discharged outside.

Everybody knows it when you sit in the car for a long time in the rain, for example, the windows start to mist up very quickly and at some point the condensation water runs down the windows. The same happens in the house and the humidity together with the dust on the surfaces is the optimal environment for mould. 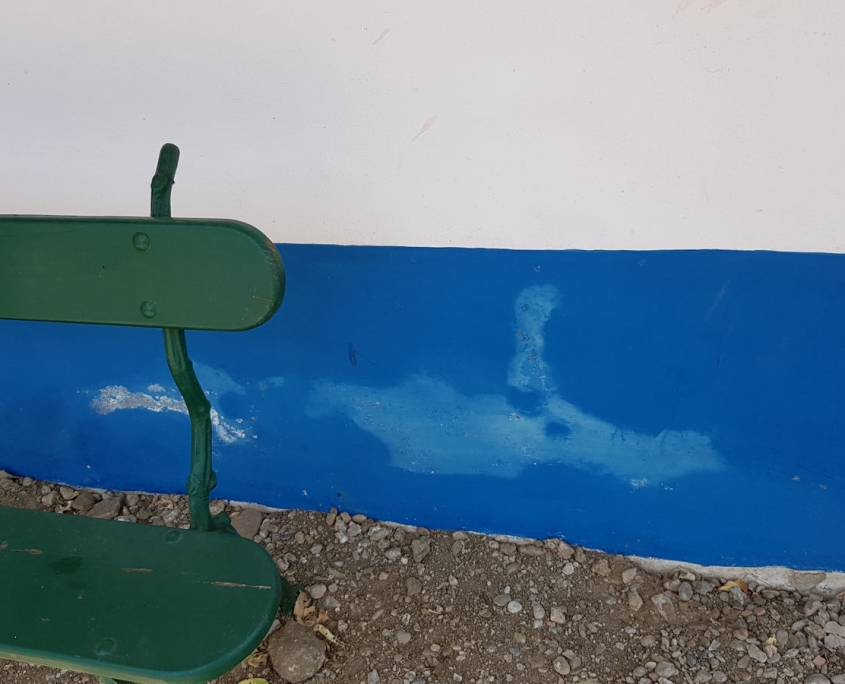 In order to always have a pleasant room climate, to keep heating costs and costs for renovating and redecorating low, I always recommend my customers not to act only when it looks really bad, but to take a tour around the house at least once a year, preferably in autumn, and to inspect the facade for defects with a critical eye.
If something is then always done immediately, it usually costs very little in comparison to waiting too long until the façade has to undergo proper renovation.

Brownish, greenish or even reddish discolorations of the facade or parts of it indicate that something is wrong. These discolorations are signs of the presence of algae and fungus that undermine and destroy the facade protection.

This has several causes: 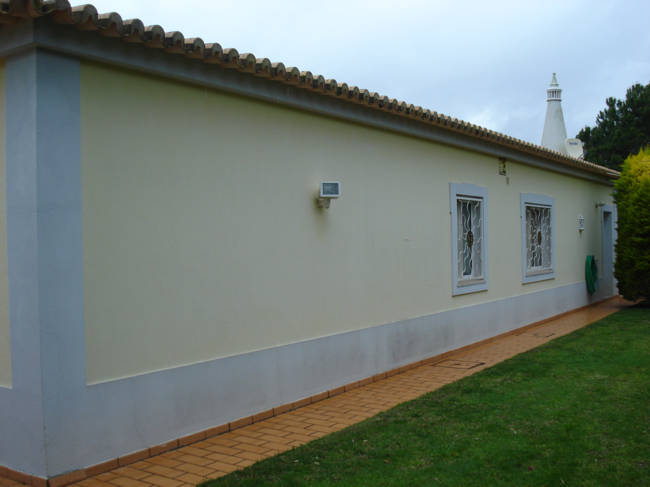 Algae on the facade

Cracks in the facade

Even if you use the most expensive facade paint available on the market, you will not benefit from this without expert preparation.

With our facade renovations, 60-80 % of the time is taken up by the preparatory work alone, which ultimately guarantees the long service life.

The preparatory activities include:

In this way we can ensure that you as a customer enjoy your facade for as long as possible.

We provide 5 years guarantee on our work and the renovation interval is between 7 and 12 years depending on the condition and location of the property.

Thanks to our carefully executed preparatory work, the subsequent renovation coatings due to contamination etc. of the façade can then also be carried out much more cost-effectively, because the time-consuming preparatory work is no longer necessary.

I am often asked whether we also design thermal insulation systems. In addition a little story from my own life:

More than 20 years ago I covered the facade of my former house with a thermal insulation system. I had previously completely renovated the house myself and actually installed the insulation “just so” because I had the material to spare and thought it was a good idea to reduce the already very low heating costs even further. In the following year I was really able to save some firewood and in retrospect I felt confirmed in my plans.

In the third year, however, the unexpected happened: It started to go mouldy in several places: in the corners, in the middle of the larger areas and especially inside the base area. It had never done that before. I became suspicious. I measured the moisture on the surface and also in the centre of the wall. The result on the surface showed that there was condensation moisture that had never been there before, and the moisture in the middle of the wall had also risen sharply. I could not explain this at first, because the cork insulation meant that there were no more cold bridges.

What I had completely underestimated, however, was the fact that the insulation, which in my case consisted of cork and a highly diffusible mineral plaster system, did not take away the diffusibility of the wall, but it did delay it considerably. This meant that the moisture that developed inside the house was absorbed by the walls, but was no longer – as before – released to the outside. In addition to this, houses here in the Algarve usually have no horizontal barrier, or none at all, that has been properly installed. The additional moisture from below rose and could no longer diffuse to the outside as usual due to the insulation. At a certain point of moisture saturation of the wall, the first “symptoms” appeared in the form of visible mould. After much deliberation and consultation with a German expert I knew, I finally decided to remove the insulation again. This resulted in no further problems with mould or similar.

In 2019 alone, we removed the insulation from three of our customers for the same reasons. The first signs of mould infestation had also appeared with them after about 2.5 to 5 years.

In other words: if insulation is required, then for new buildings that are designed in such a way that the thermal insulation system has already been taken into account during the planning stage; or for old buildings only after thorough expert examination.

For this very reason, we do not offer our customers the service of installing a conventional thermal insulation system and concentrate on creating facades that are open to diffusion and at the same time absolutely resistant to moisture, so that no evaporation cold can develop on the surfaces inside, against which additional heating would be necessary. In this way, a pleasant and, above all, healthy indoor climate can be achieved here in the south and even save on heating; without any expensive thermal insulation systems, which – it should be mentioned – only have a durability of plus/minus 20 years anyway. Since these systems are also made of different materials, their disposal is correspondingly cost-intensive – possibly even more expensive than the original installation.

From my point of view therefore not necessarily recommendable.

All further questions are best answered on a case-by-case basis directly at the property.

We may request cookies to be set on your device. We use cookies to let us know when you visit our websites, how you interact with us, to enrich your user experience, and to customize your relationship with our website.

Click on the different category headings to find out more. You can also change some of your preferences. Note that blocking some types of cookies may impact your experience on our websites and the services we are able to offer.

These cookies are strictly necessary to provide you with services available through our website and to use some of its features.

Because these cookies are strictly necessary to deliver the website, refuseing them will have impact how our site functions. You always can block or delete cookies by changing your browser settings and force blocking all cookies on this website. But this will always prompt you to accept/refuse cookies when revisiting our site.

We fully respect if you want to refuse cookies but to avoid asking you again and again kindly allow us to store a cookie for that. You are free to opt out any time or opt in for other cookies to get a better experience. If you refuse cookies we will remove all set cookies in our domain.

We provide you with a list of stored cookies on your computer in our domain so you can check what we stored. Due to security reasons we are not able to show or modify cookies from other domains. You can check these in your browser security settings.

We also use different external services like Google Webfonts, Google Maps, and external Video providers. Since these providers may collect personal data like your IP address we allow you to block them here. Please be aware that this might heavily reduce the functionality and appearance of our site. Changes will take effect once you reload the page.